Etosha National Park is one of Africa’s best game reserves for game viewing opportunities and was claimed as Namibia’s first conservation area in 1907. Its eastern territory is dominated by a vast, shallow pan of silvery sand while the rest of the park is covered with sparse shrubs, grassy plains and mopane trees.

During the dry season, thousands of animals converge to drink at the waterholes – elephant, giraffe, rhino and lion, possibly leopard, cheetah and various types of antelope. The need for water by prey and hunter alike creates spectacular hunting scenes in a bid for survival until the rainy season comes. The dry season from May to October is the best times to visit for a pure wildlife experience.

For the greater part of the year, the pan is a bleak expanse of white cracked mud which shimmers with mirages created by heat. In November, dramatic thunderstorms lighting up the heavens, followed by heavy rain, change the landscape drastically to a vast expanse of water, attracting large colonies of birds including the greater white pelican and hordes of flamingos painting Etosha with a dash of pink.

The park was designed to make wildlife and bird viewing easy. Good roads, signposts and plenty of lookouts make Etosha perfect for self-drive tours. The three rest camps of Okaukuejo, Halali and Namutoni offer many choices when it comes to lodging. It is easy to understand why Etosha is probably Namibia’s most popular tourist attraction.

Highlights on your trip are the Waterberg Plateau Region, the amazing and abundant wildlife and colorful birdlife of the Etosha National Park and its surrounds. The hustle and bustle of the Namibian Capital Windhoek.

Welcome to Namibia! You arrive at Hosea Kutako International Airport Windhoek and be met by your friendly transfer driver taking you to collect your rental vehicle at the depot. Your exciting journey continues immediately towards the North of Namibia. In the late afternoon you will arrive in the magnificent Waterberg Region and check-in to the lodge for your first night under Namibian skies.

Enjoy a leisurely breakfast before you continue your journey, travelling via Otjiwarongo, Otavi and Tsumeb to reach the Etosha National Park Region. Check-in to your lodge and relax in your wonderful African surroundings, alternately travel the short distance to the Park Entrance and enter the famous Etosha National Park for an afternoon of game viewing. Return in the late afternoon to your accommodation outside the Park.

Today is yours to spend at your leisure. Your lodge offers a choice of wonderful activities, or pleasant relaxation at the pool. Alternatively, spend time in the Etosha National Park once more viewing a variety of animals and birds from your safari vehicle, or stop-off at the Park Resorts for refreshments/a swim/to relax at the waterhole and view the wildlife which comes to drink.

Today your safari continues along the same route you travelled to Etosha, back to Windhoek.. In the afternoon perhaps you would like to enjoy some souvenir shopping at the famous Craft Center – representing the colorful Arts and Crafts from Namibian ethnic cultures. Alternatively, take in some of the historical sites of Windhoek, such as the Tinten Palast (House of Parliament) and the beautiful Christus Church.

Today it is time to say good bye and leave Namibia taking fond memories of your adventures home with you! Drop off your Rental Car and be transferred to the Hosea Kutako International Airport for departure. Namibia hopes to welcome you again!

Etosha National Park is a national park in northwestern Namibia. It was proclaimed a game reserve in March 1907.The park is located in the Kunene region. 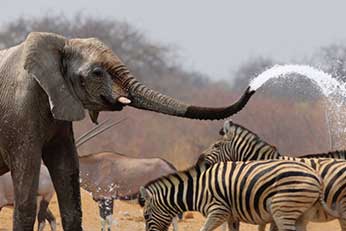